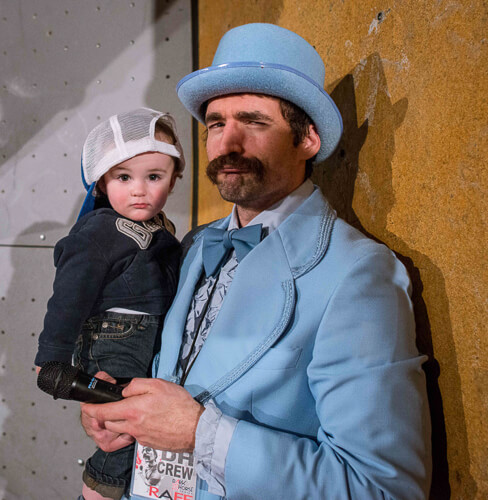 Bryan “Raff” Rafferty was born and raised in the Boston area. He began his climbing career by exploring the seemingly endless supply of underrated granite in New Hampshire and Maine. From the first moment his skin touched the stone, a transformation took place which would change the bloodline of Rafferty forever. A climber was born. His timeline was permanently shifted to one of adventure and mischief. With an insatiable thirst for the vertical life, the act of rock climbing became a platform for what would become a wide array of side projects and hobbies leading him on the path to eventual glory in becoming the General Manager of one of the finest climbing facilities in the world–Central Rock Gym.

Always psyched and rarely idle, you’re bound to see this elusive creature out at the crag or in the gym complaining about gravity. When you see him at the gym make sure you give him a giant bear hug. 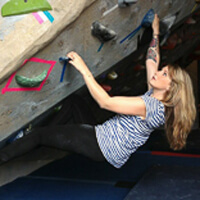 Growing up right down the street in Lexington, Becky first found climbing at a Boston area gym in 2001. From that moment forward the climbing gym became a second home. As an adult, Climbing gyms have become her life. She has had the fortune of working at gyms all over the east coast from Philadelphia, to the south coast of Massachusetts, and finally back home, here at Central Rock Gym Stoneham. Becky continuously works to grow a community around her that is welcoming and inclusive to everyone. She finds direct inspiration from the sense of community she first experienced in climbing as a child.

A jack of all trades, outside of climbing Becky enjoys numerous interests including building furniture, motocross, riding BMX, snowboarding, boxing, and photography, She is the loving mom to one wrinkly Sphynx cat and one pointy-eared French Bulldog. 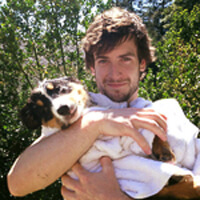 Like a Spartan, Connor was brought into the battlefield of climbing with his weapons at the ready. Within the first few weeks, he had a drill in hand and went to work relentlessly training a skill-set that would quickly evolve into a career and lifelong passion. Nearly 6 years later and that drive has only gotten stronger. A Massachusetts native, Connor has dedicated time to both indoor and outdoor endeavors. Having lived out of his van for a year while traveling the West coast in search of the best bouldering, he has always thrived on the lack of monotony that climbing provides. Every day being a new adventure, and every climb being a new set of challenges is what’s helped Connor push his limits as a climber.

When he’s not creating movement, you can find him spending time with his better half…his dog Ella. Luckily she thrives on affection, belly rubs, and sitting on the feet of those she deems worthy to pet her. 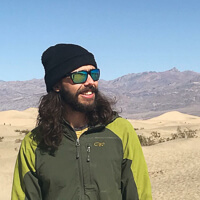 Is that Kevin Jorgensen? No, it’s his look-alike and Pre-Elite Team Head Coach, Josh Saball. Born into a climbing family, Josh spent much of his early life traveling the country with his parents while they pursued their passion for the sport. As soon as he was able to walk they tied him into a rope and he has been climbing ever since. In 2016, Josh began a career as a climbing coach and has worked with all skill levels, from beginners to competitive athletes.

Always psyched to tell some jokes, talk history, or just nerd-out. If you see Josh running around the gym stop him and say hello! 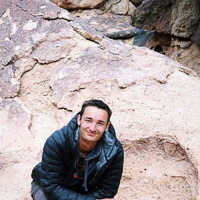 Originally from New Hampshire Gavin grew up playing all kinds of sports throughout middle school and into high school, it wasn’t until his junior year when he started climbing. He quickly dropped everything and dove into the climbing scene. Not long after he began climbing he started setting at Boston Rock Gym and was the Head Route Setter there for two years before joining the Central Rock Gym team. You can find him outside bouldering every weekend at local crags.

Climbing has taken him all over the world from Bishop California where he lived out of his car for a month to Rocklands in South Africa where he had only one worry, to send! He is excited to see where his next climbing adventure will be. 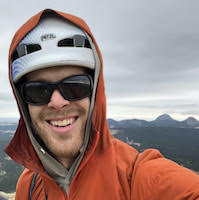 Patrick grew up in New York state, but has always had family ties to New England, suffering the constant harassment of being a Bruins/Patriots fan in New York. His 12-year career as a high school history teacher brought him to the promised land of Massachusetts, where he can cheer his favorite sports teams publicly and without fear of bodily harm. Patrick’s 15-year evolution as a climber is the antithesis of what has now become the norm: he first learned to climb trad on a NOLS course, then learned to ice climb, and only recently has begun to more seriously approach sport climbing. Bouldering terrifies him, but these days you can even find him upstairs in our bouldering area blowing off of moves that his athletes make look easy.

Patrick has to keep moving to survive. When he’s not climbing, he can be found running, hiking, lifting, and playing with his dog. When he’s forced to sit still he enjoys cooking with his wife, planning his next climbing trip, and reading.