Hailing from Miami, Elayne spent many months training and eventually working in a humid climbing gym before ever touching real rock. Taking full advantage of living in the tropics and generally being not super fond of climbing in the cold, she’s enjoyed climbing in places like Cuba and Puerto Rico but has also found herself on unplanned nighttime descents in Red Rock Canyon, El Potrero Chico, and more.

After years of trying to balance a love for climbing with the grueling schedule of the entertainment industry,  she was lured back to her gym roots in 2018 alongside the incredible team that opened CRG’s  Manhattan location. She is beyond excited, now, to join the lovely team here in Hadley. If you see her around the gym, please say hello and feel free to give suggestions on things to do in town, neat local trails, and surviving winter.

If you need to know anything about Brian, it’s his passion for fitness and health. Brian was introduced to climbing through CRG and was hooked on the unique movement climbing presents. Before climbing, Brian was a very competitive Track & Field athlete and still is to this day. You can most often find him in the gym, coaching, working out or just hanging out!

Pat has an extensive history of management dating back 17 years. In a career move, he joined the team at CRG in early 2019. Pat has been a fitness and outdoors enthusiast all of his life.  He fell in love with climbing 5 years ago and spends most of his free time in the gym.

When he’s not at CRG, he is probably eating comically large portions of vegan food and drinking strong black iced coffee.  If you see him bouldering, feel free to say hello.

Jane was first introduced to rock climbing by her brother. While receiving her MBA at Stony Brook, Jane worked in a variety of sales roles, but after spending time working in different youth camps across the country, Jane realized her true passion was teaching and encouraging kids!

Jane has participated in sports her whole life. For the last five years, she competed at the Division I level in cross country and track and field. She’s recently picked up rock climbing and is trying her best to apply her track and field strength to some more challenging climbs! In her spare time, Jane can be found anywhere entertaining a crowd. She loves meeting new people and making people laugh! 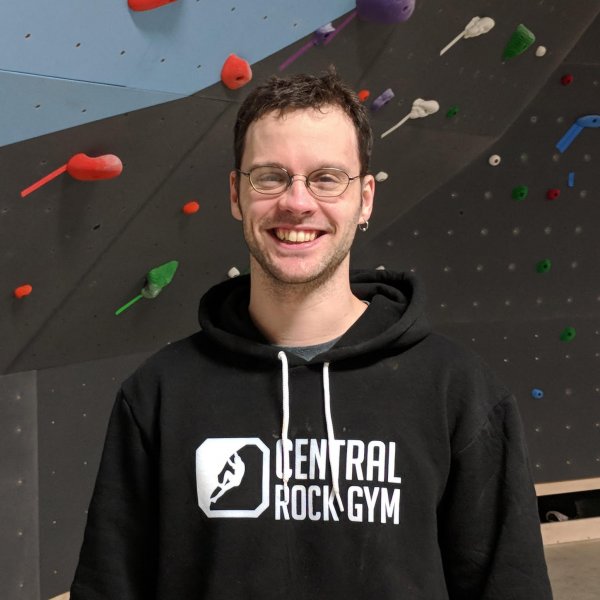 Brian hails from Portland, Oregon where he has spent the last 10 years setting and coaching in the Pacific Northwest. In his setting he strives to create not only routes that everyone can enjoy, but also provide a challenge for all climbers no matter how experienced they may be. During his off time, Brian enjoys playing all kinds of games, sleeping in with his cat and going on climbing and other outdoor adventures.

Levi has been an employee at Central Rock Gym since 2014. He started working for CRG Glastonbury and before moving to Amherst to work here in Hadley full time.

Levi has been climbing since he was 8 years old with his dad, a climber of over 30 years. He took Levi to his first climbing wall and Levi has loved it ever since. He has traveled and climbed most of the East Coast, everything from Kentucky to Maine and his favorite type of climbing has always been long technical face climbs. Levi hopes to one day go to Yosemite National Park to put his skills to the test on the best face climbs in the world.

When Levi is not climbing, he enjoys relaxing at home, playing copious amounts of video games, watching movies, reading comics and playing Magic: The Gathering. During the warmer months he also tries to fit in as much Ultimate Frisbee and disk golf between climbing as he can.